ELCOVISION 10 ElTheo is a "device driver" for total stations with serial or Bluetooth interface, which enables a CAD program to communicate directly with the total station. The main advantage is that every function of the CAD system becomes a measurement function. The total station can be seen like a 3D pen. A digital 3D drawing of the object is created online.
The integration of the measuring instrument into the CAD environment also offers the advantage that design and measurement are one. However, not only 3D measurement is supported, but also distances measured with a folding rule or the Leica DISTO can be incorporated without any additional effort.

The Stationing of the Tachymeter

In addition to setting up on known points, it is possible to define a local system of coordinates. This can be defined arbitrarily in any direction or over two measurements the X-axis is aligned parallel to e.g. a facade.

If there is already a drawing or known points, the stationing can also take place via a free stationing: To do this, simply click on visible points in the drawing and use the tachymeter to measure them appropriately. Free stationing is possible in 2D and also in 3D.

The measurement modes of ElTheo

3 different measuring modes are offered. These are the normal polar measurement, the plane intersection and also the forward intersection.
All measured points are recorded in 3D, but can also be projected in planes.
If you want to record a ground plan, a section or something similar, you can define any planes, the measurement is also projected into this plane and additionally stored in 3D.
Often the coordinate master holders are quite large and one prefers smaller coordinates in CAD. A constant deduction can then be defined so that all coordinates sent to the CAD are reduced by this amount and all coordinates coming from the CAD are shifted by this amount.

Balanced Planes for Projections and Profiles

A plane can be defined over any number of points. Furthermore, planes can be defined as parallel planes or perpendicular planes to an existing plane. They can be found at any time using a name of any length.
These planes can be used arbitrarily as projection planes but also for the plane intersection as measuring method or for the definition of a user coordinate system in CAD.

The stakeout module of ELCOVISION 10 ElTheo is mainly used to check existing plans or to show a point in the locality.
Motorized total stations are controlled directly by ElTheo.

For profile measurements, a maximum limit can be specified by which the measured point may be removed from the profile plane. If this limit is exceeded, the user is warned.

All measurements are automatically logged by ElTheo. These points can be transferred to the drawing at any time. The points are either projected into a plane or transferred in 3D. The points can also be labeled with any point number, coordinates, etc..

ELCOVISION 10 ELTheo Overview of Features and Comparison with THEO online 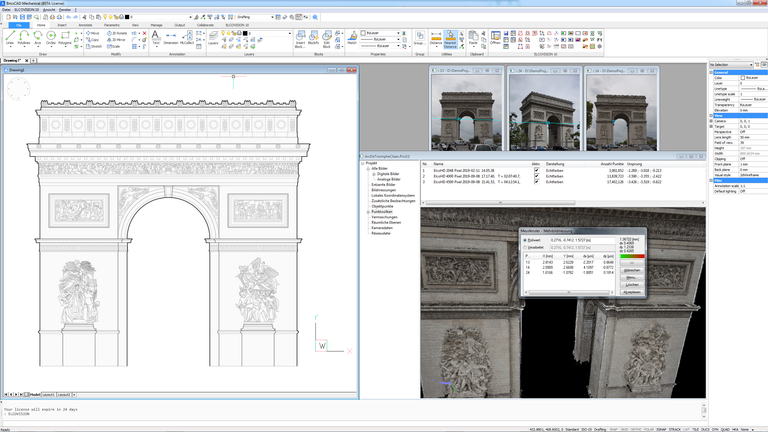